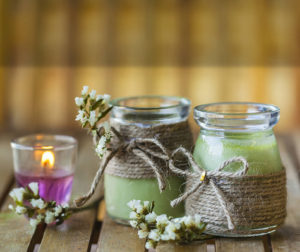 I was standing in the kitchen watching the hostess finish the last two trays of food when, as a good guest would say, “Your yard and decorations are so lovely.” Her reply was, “Oh, I repurpose”. At which point she lifted one of the trays, handed it to me and off we went to the beautiful back yard.

As the party was winding down – yet another guest complimented the hostess on the lovely way the area had been decorated. Here was her reply. “I try to repurpose things. The twinkle lights in the corner of the yard are our front yard lights at Christmas on the Holly bushes. Instead of storing them, I bring them to the back yard and hang them in the climbing vines to give light to that corner of the yard. The candles are in jelly jars I bought from a neighbor for 10 cents whose peach tree had been removed due to a water line problem. He was not going to make jelly any more. The ties around the napkins are ribbon that I rolled up after my daughter’s wedding shower. I cut them up and made napkin rings out of them. And the round balls nestled next to the candles – those are golf balls. I got them from a friend who harvests the lost balls in the tall grasses next to his property.” She went on to explain that the balls lay in the rugged tall grasses for several months and once or twice a year they are collected and given to friends. Her comment about her husband recent back surgery noted that he was no longer playing golf. Thus the supply of golf balls were available for repurposing.

She had covered the golf balls with several different colors of glitter and then placed them in small groups around the jelly jar candles. The yard was Magical with reflected lights and shimmering globes.

When I got home, I started to think about “repurposing” of life. The popular book, Purpose Driven Life by Rick Warren, has always been an inspiration to me. When I first mentioned repurposing of life to a widow friend, she said that her only repurposing was with material things. She gives her neighbor plastic grocery bags to be repurposed on his morning and evening walks of his two very large dogs. Not sure if that counts.

I have witnessed the Repurposing of Life, however, after grief events in the lives of many of the participants in the ministry that I lead at my church. They now glitter and shimmer in calm contentment. They are a witness to others of God’s new purpose for their life.

I think those that have had significant losses are like the lost golf balls. They had been hit hard by a life changing grief event and have had an unexpected change in course. A different trajectory has landed them in rough tall grass rather than the smooth greens of life that they thought they were headed toward. The loss has practically taken them out of the game. As humans, we generally expect that hard work, determination and will power should push us through those unsettling parts of life. Grit and drive just don’t solve the problem nor heal the deep feelings of loss. If we apply human feeling to the golf balls in the tall grass, we note that they are not only lost, but they have been abandoned, rejected and feel all alone. Those are the exact feelings that are often expressed and experienced by those that grieve.

I believe that God calls us to a new purpose. We are to be repurposed after losses that include the death of spouse, parent, sibling and child, or divorce, broken relationships and all the other significant losses that have either “sliced or hooked” us off the course of life into the deserted terrains of life. God really does not leave us alone. He asks us to trust His leading as he moves us to a repurposed life. A life, that even in the midst of darkness, His light can shine through.

I can name many examples of repurposed life. I know that many who have had significant loss in their lives have taken up the cause of medical research for the particular disease that took the life of their loved one. For example, when the walk to the mail box was her only exercise, one woman trained and completed a 3 day walk for breast cancer. A teacher touched by suicide, redefined her work from the class room to the counselor’s office to identify students who were in crisis. Several have remarried. Many have found that travel and new leisure activities are their new purpose. Almost all have formed new friendships that have brought them opportunities for social activities. Some have joined civic groups that raise funds for scholarships. A few have moved or are now active in the care of their grandchildren. One became a Deacon. One lead a ministry to have a memorial walk with names of loved ones placed around the church. One wrote a book on the loss that touched her family. One became a child advocate for the court. One began a “Funeral Brigade.” (It is a group of widows and widowers who coordinate meals and transportation for church members who need help with funeral details.) I have witnessed life transition or repurposing of life many times over in my years of ministry. I just didn’t know what it really was.

There is recovery from grief. It takes time for healing. Time for God to lift the burden of sadness, reweave the fabric of our lives and to bring recognition of His blessings each day in our lives. Walking daily out of the “Valley of the Shadow of Death” to a place of abundance, is His promise in the 23rd Psalm. Look for God to lead you to a place where you can shine light into the darkness if your loss has drained you of energy and taken off the track you had planned for your life. Becoming a glittering new being who has been repurposed to be joyful and content. God’s promise is in Romans 8:28, And we know that for all things God works for the good of those who love him, who have been called to his purpose.

Let your light shine. Light up the world. Repurpose your life.