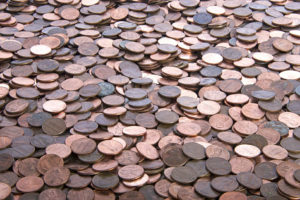 I was attending a conference on adoption where the nonprofit known as Brave Penny told their story of Birthmothers finding abundant life after choosing to gift their child through adoption to another family. The name – Brave Penny came from Brave – the decision to choose life and adoption for their child and Penny – the name of a lady whose death was the driving force of a grief recovery ministry in North Texas.

Upon the exhibit table was a scattering of shiny pennies and a “Penny” embossed piggy bank. When conference attendees approached the table, they were invited to place a penny in the bank as a commitment to birthmothers. “If you believe in Birthmothers – put a penny in the bank” was the greeting. Eagerly the attendees selected a coin or two and put them into the bank.

So often the birthmother is like the character in act one, scene one of a play. The character makes a brief appearance in the opening scene and then never appears on the stage again. They may only be referred to once or twice during the remaining acts of the production. The role of Birthmother is often not valued in the closed adoption that was utilized as an adoption model for so many years.

The play has undergone a major rewrite. Open adoptions and Semi open adoptions have changed the role of the birthmother so that she is seen and heard throughout the life of the child and the adoptive family. Significantly changing the interactions and dialogue of the play. The outcome of the play is still the same with the child nurtured by a family who genially wanted to adopt and love a child. – But the characters are healthier, they are valued and they are honest in new and noble ways. Supporting open adoption where and when possible, is the rewrite that blesses those that step on the stage of adoption life.

Toward the end of the conference, one of the attendees approached the table and commented on the remaining pennies still spread on the table. “I want to drop a penny into the bank for each of the birthmothers that have blessed adoptive families that our adoption organization has served.” One by one the pennies went into the bank. Down to the very last penny, each penny represented a blessing, a healthy family, an emotionally stable child and a rewrite of the play call adoption.